Very few have the talent and determination to compete professionally in a single sport, let alone in two. But, as the article below demonstrates, Curtis Woodhouse is no ordinary individual.

Most professional sportsmen are content with being able to perform in their chosen sport. Not so Curtis Woodhouse, who carved out a career firstly as a successful footballer before hanging up the boots in favour of the boxing gloves at the age of just 26. His love of both sports developed at an early age, with his interest in football stemming from watching Hull City on the terraces at Boothferry Park. Interest in boxing and fighting developed in a far less civilised way, with Woodhouse learning to defend himself out of necessity, and also go on the attack, often responding to racial abuse directed towards him. As Woodhouse himself remembers,

‘I went from scrapping in the street and at school to fighting in the boxing ring from the age of 12. I was called a few names due to the colour of my skin, but with a quick smack in the mouth they soon backed off.’

For someone who has estimated that he involved in at least 100 street fights growing up, it is hardly surprising that his heroes were not the typical ones of young footballers at that time. Whilst his contemporaries looked up to English footballing icons of the late 1980s and early 1990s, namely the likes of Gascoigne, Barnes and Lineker, Woodhouse idolised boxing legends of the same era, Mike Tyson and Nigel Benn, both famed for their punching power and vicious steaks inside the ring.

A younger Woodhouse battling with an equally young-looking Steven Gerrard.

Throughout his career, the uneasy combination of football and extra-curricular fighting continued. At Sheffield United, he was frequently hauled into manager Neil Warnock’s office, who was less than impressed with his player turning up for training sporting a black eye and a fat lip, after sessions in the boxing gym. After a £1 million move to Birmingham City, former England Under 21 international Woodhouse played three times in the Premier League and many more for the Blues in the Championship, where his image of a tough-tackling, aggressive midfielder was firmly established. However, it was his off-field fighting that caused the most headlines in the West Midlands, and, indeed, established his reputation nationally. This notoriety was best illustrated after Birmingham’s League Cup final in 2001, a game for which he was cup-tied. That night, Woodhouse, along with two others were charged with affray, having trashed an Indian restaurant and started a brawl with university students. During this period, his continued desire for fighting caused him to fall out of love with the game, something he never truly rediscovered. Over the next seasons, Woodhouse played for Rotherham United, Peterborough United and his local side, Hull City, captaining the Cambridgeshire and Humberside outfits in the process. However, his need to fight remained powerful and he decided to retire at the end of the 2005-2006 season to concentrate on a career as a professional boxer, stating that ‘boxing has always been my first love. I love fighting…Rather than get locked up for it, I might as well get paid for it.’ Ironically, his final game in the Football League was a playoff final at the Millennium Stadium, Cardiff, scene of his infamous brawl five years before.

Since turning pro in September 2006, Woodhouse has continued to play, albeit at non-league level for Rushden and Diamonds, Mansfield Town, Harrogate Town, and, most recently, Eastwood Town. He has struggled to juggle the two commitments, retiring on more than one occasion in an attempt to fully concentrate on life in the ring. However, he has always returned following these brief interludes away, and is now combining his boxing career with his role as manager of Northern Premier League Division One South club Sheffield F.C., the oldest football club in the world. This arrangement allows him to remain in football but in an environment in which he is capable of fully focusing on his favoured sport. 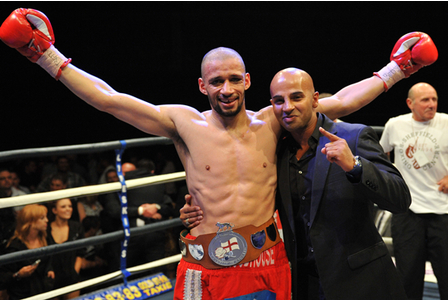 Curtis Woodhouse has always been an unusual and interesting character on and off the pitch, and indeed now in and out of the ring. He joins a select few who have competed professionally in more than sport. However, as English light-welterweight champion and former Premier League player, Woodhouse is no Andrew Flintoff, someone whose commitment to boxing is more than questionable, with most viewing his decision to turn professional as a poorly disguised publicity stunt. Instead, it is more appropriate to place Woodhouse alongside sportsmen such as Denis Compton and All Black Jeff Wilson, individuals who competed at the highest level in both sports that they played.

THE CRAZY GANG: A REAPPRAISAL »
« The Revolving Door Continues: Over To You, Mr Benitez