THE SECOND COMING: THE RETURN OF JERMAINE JENAS TO NOTTINGHAM FOREST

Whilst it may not rank alongside the resurrection of Christ or the expectation surrounding the long-awaited second album by The Stone Roses, the return of Jermaine Jenas to the City Ground has understandably generated much excitement amongst Forest supporters in preparation for their match against bitter rivals Derby County tomorrow. 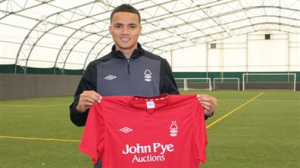 Over ten years ago Jermaine Jenas, one of the many products from Forest’s successful youth academy, left the Reds in a £5 million move to Newcastle United. In the years that followed, the fortunes of both player and club fluctuated greatly. Whilst in this period Jenas went on to have successful spells in the North-East and at Tottenham Hotspur, Nottingham Forest endured a dismal three year stay in the third tier of English football, experienced successive playoff disappointments under Billy Davies and last season had to contend with the sudden and tragic death of owner Nigel Doughty, which led to a turbulent year both on and off the pitch. However, last season was also challenging for Jenas, who did not feature in Harry Redknapp’s plans. Loaned out for the season to Aston Villa, Jenas was affected by a number of niggling injuries which hampered his progress in Birmingham. In his third appearance for Villa, at home to Manchester United, Jenas suffered a ruptured Achilles injury which curtailed his stay at Villa Park before it had properly begun. At the age of just 29 it appeared that a once promising career would fall by the wayside, remembered as one that had promised so much but had ultimately flattered to deceive at the very highest level.

Jenas’ spell at Aston Villa was punctuated by injury, frustration and disappointment.

However, footballing redemption for Jenas may be found once again at the City Ground. On the surface, it is hard to view his move in such a positive light. Despite his injuries and lack of match practice over the last few years, Jenas clearly has enough ability to still play in the Premier League. Forest, after all, are only in the second tier of English football, and whilst having made a number of positive signings in the early part of the season, are unlikely to be one of the main challengers vying for the sought after prize of promotion. Therefore, it is debatable whether Forest can match the ambition that Jenas surely demands. Despite this, if Jenas can become a settled part of the Forest team in the next month, his undoubted physical and technical attributes should shine through at Championship level, allowing him to regain his confidence. Moreover, playing in a familiar environment that he finds comfortable may allow him to rediscover the form that earned him 21 caps for the national side and established him as a mainstay in the Tottenham midfield for a number of years. On the other hand, failure or injury at Forest could signify the end of his career at the top level. At this moment, Jermaine Jenas needs Nottingham Forest as much, if not more than Nottingham Forest needs him. One wrong turn and his career would be discussed as one of wasted talent. By contrast, if his loan spell is successful in allowing him to return to the Premier League, either with or without Forest, he is young enough to be acknowledged again as one of England’s best current central midfielders. It will certainly be interesting to see how he fares back at Forest. He has certainly picked an interesting game to make his second debut for the club.

Leicester City – The fickle finger of the fans »
« Newcastle United And The Eight Year Contract: An Act To Admire Or Simply Blind Faith?